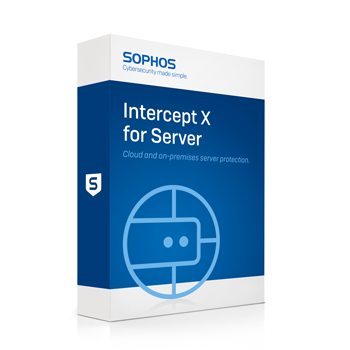 Whether in the cloud or on premises, you need to protect the critical applications and data at the core of your organization. Intercept X for Server offers a comprehensive, defense-in-depth approach using deep learning malware detection, exploit prevention, anti-ransomware technology, application white listing, active adversary protection, and in-depth root cause analysis.

Intercept X for Server leverages a broad set of protections to stop zero-day attacks, exploits, and hackers. These protections prevent attacks from reaching servers in the first place, detect attacks before they run, or stop them and provide a thorough cleanup if they manage to evade protection. Its constantly updated artificial intelligence model is trained to look for suspicious attributes of potentially malicious code on servers. Plus, server-specific features such as Server Lockdown and Cloud Workload Discovery ensure that server configurations are safe.

CryptoGuard defends against ransomware, working at the file system level to detect and intercept unsolicited file encryption, both on the server or from a remote endpoint connected to the server. WipeGuard similarly works to protect the master boot record from malicious encryption.

Sophos Intercept X for Server locks down your server with a single click, whitelisting your applications to secure servers in a safe state and preventing unauthorized applications from running. Sophos automatically scans the system and establishes an inventory (whitelist) of known good applications without the need for manual rule creation. Sophos creates an unbreakable bond between applications and associated files, such as DLLs, data files, and scripts.

Vulnerabilities appear at an alarming rate, and patching servers without disrupting users can be challenging. Exploit attacks can be devastating and are often undetectable by traditional server protection technologies. Intercept X for Server is designed to stop even the most stubborn hacker from using exploit techniques to harvest credentials, whether they try to remain hidden and persistent, or move laterally, Intercept X is designed to stop them.

Intercept X for Server also includes detection and response technology to provide complete visibility so admins will know how an attack got in, where it went, what it touched, and what you should do next. Intercept X for Server provides this without an additional agent or management console.

Synchronized Security is a best of breed security system that enables your defenses to be as coordinated as the attacks they protect against. It combines an intuitive security platform with award-winning products that actively work together to block advanced threats to give you unparalleled protection.

Easy to manage with Sophos Central

Managing your security from Sophos Central means you no longer need to deploy servers to secure your systems. Sophos Central, hosted by Sophos, provides instant access with no console servers to set up. Sophos Central provides out-of-the-box policies for servers while also managing other Sophos products, including Sophos Intercept X, Mobile, Wireless, Email, and Web — all from a single pane of glass.

Protect the critical applications and data at the core of your organization, whether that data is on physical servers, virtual servers, or in the cloud. Intercept X for Server employs a comprehensive defense-in-depth approach including these essential protections:

Prevents an attacker from leveraging common hacking techniques
Protects against browser, plugin, or Java-based exploit kits even if your servers are not fully patched

Incident response with forensic detail
Provides the who, what, when, where, and how of a given attack, allowing IT the ability to constantly improve upon their security posture

Protects against the most persistent hacking attempts
Prevents pervasive, real-time hacking techniques such as credential harvesting, lateral movement, and code-caving

Sophos Server Protection can be deployed on a physical server, or run on a VM (either in your datacenter or on AWS or Azure). It can be managed either through the Sophos-maintained Sophos Central website, or through an on-premises management console. Both deliver outstanding performance and protection. See the table to licensing options below for details of the features available across the two price tiers on both Sophos Central and on premises with the Sophos Enterprise Console (purchased separately).

11 All features available on Windows; selected features available on Linux
2 See features of Sophos for Virtual Environments with its ultra-thin agent deployment
3 For Windows Servers managed by Sophos Enterprise Console, CryptoGuard is available with the Endpoint Exploit Prevention (EXP) Add-on license
4 When used in conjunction with the Sophos XG Firewall

Support for Windows servers on VMware ESXi and Microsoft Hyper-V